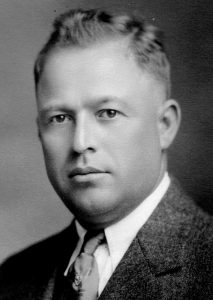 In 1910, 17-year-old Angelo Tomasso, Sr. arrived in New York from Italy, determined to succeed in America. He served honorably in World War I for his newly adopted country, then came home to make his mark in his chosen hometown of New Britain, Connecticut. Tomasso Sr.’s upbringing in Italy in a hard-working Italian family that made its living off the land, and his military service for the United States, gave him the discipline and incentive he needed to prosper. After several years working as a laborer, he used the one piece of equipment he owned – a steam shovel – to establish a construction company, Angelo Tomasso, Inc., in 1923. Tomasso, Sr.’s perseverance is legendary: In the early years, he drove his steam shovel overnight from New Britain to Hartford because a contract for constructing the foundation for the Hartford County Building was to be awarded to the first to arrive on site. He won the contract. During the 1930s and 1940s, Tomasso paved the majority of the roads in New Britain and built the first section of New York’s Taconic Parkway and the original Brainard Airport in Hartford. Proud to be an American and always thankful for his blessings, Tomasso became active in the community and established a culture of giving back that is alive and well today. A founding member of several ethnic organizations in the area and personal friends with Franklin D. Roosevelt, Tomasso, Sr. passed away in 1952. Thank you, Angelo Tomasso, Sr., for your service to America and your community. 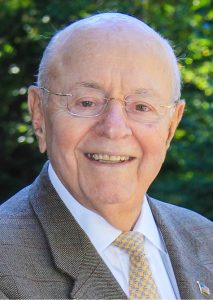 Angelo Tomasso, Jr. followed closely in his father’s footsteps. He served with distinction in the U.S. Navy during World War II, receiving a Purple Heart for wounds sustained in the Philippines. He was selected for Officer’s training and sent to Auburn, Alabama, where he met his future wife, Joy. Following his honorable discharge in 1946, Angelo, Jr. earned a Bachelor of Science degree in Civil Engineering from Auburn University. Upon his father’s death in 1952, Angelo, Jr., became president and chief executive officer of the Tomasso Company at age 27, and managed the company along with brothers Victor, George and Bill. The company became famous for major construction projects including Interstates 91 and 84, Routes 9 and 2, and corporate headquarters including Emhart, Stanley Works, Aetna and Bristol Myers. As he was building the company, Tomasso, Jr. continued giving back to his community, as his father had done, and over the years earned numerous civic service honors: In 1978, he received the National Jewish Hospital and Research Center Humanitarian Award. In 1986, he was named Citizen of the Year by the New Britain Lodge of Elks. In 1988, he received the Golden Lion Award from the Order of the Sons of Italy. In 1990 he received an Honorary Doctorate of Humane Letters from CCSU. In 1996, he was named Man of the Year by the New Britain Press Club. Also in 1996, he received the Royal W. Thompson Lifetime Achievement Award from the Connecticut Association of Street and Highway Officials. Thank you, Angelo Tomasso, Jr., for your service to America and your community. 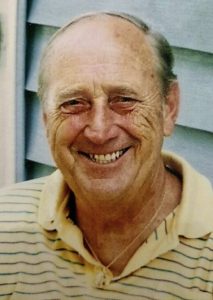 Now well into his 90s (and going on 70), Al Nelson is a familiar face at New Britain Stadium, home of the New Britain Bees baseball team. In fact, Al may be New Britain’s biggest baseball fan, having acquired the nickname “The Mayor of New Britain Stadium” for his loyal attendance at virtually every New Britain Red Sox, Hardware City Rock Cats, New Britain Rock Cats, New Britain Bees (Atlantic Coast League) and New Britain Bees (Futures Collegiate Baseball League) game since the old Bristol Red Sox relocated to New Britain for the 1983 season. Al is a familiar, smiling face at his regular third-base line seat – appropriately labeled with his name by the club – for New Britain Stadium regulars and occasional visitors alike, and his youthful energy, eternally sunny disposition and loyal New Britain fandom has endeared him to thousands over the years. However, what many may not know about Al is that he is a proud U.S. Navy veteran who served at the end of World War II aboard the USS Mansfield, a Sumner-class destroyer that patrolled the Pacific during Al’s years of service from 1945-1949. One of Al’s proudest moments was witnessing history along with his fellow shipmates as he attended the Tokyo War Crimes Trial at the War Ministry Office in Tokyo in 1946. Al’s service was not done when he came home, however, as he went on to serve 30 years as a firefighter, first with Ladder 1 and then Engine Co. 5, with the New Britain Fire Department, retiring in 1984. Thank you, Al Nelson, for your service to America and your community.

Also Being Honored at October 7 Event will be WWII [...]