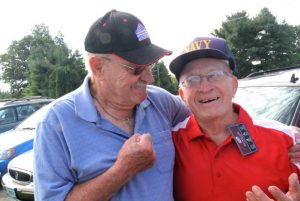 Hosted by the Disabled American Veterans, Hardware City Chapter 8 and presented by Liberty Bank, the event is the state’s largest veterans charity golf tourney and has raised more than $140,000 for Connecticut veterans causes since 2011. The “GK” is returning this year following a two-year, pandemic-influenced hiatus. More than 200 golfers and upwards of 300 dinner guests are expected to attend.

D’Amato, 95, is a New Britain native and the youngest of 14 children. When he entered the Navy on June 20, 1944 – just 14 days after the D-Day invasion – he became the sixth D’Amato brother to serve at the time, joining the Plocharczyk boys as the largest sets of siblings from New Britain to serve during World War II. D’Amato was a Seaman First Class aboard the USS J.D. Yeager and USS Merrimack, delivering supplies to the Soviet Union while stationed in the North Atlantic and later landing in Japan following the Japanese surrender. Willie worked for many years at Fafnir Bearing Company and stays young playing golf several times a week at his home course, Timberlin Golf Club in Berlin, and elsewhere.

Polaske, who will turn 94 just three weeks before the event, is also a New Britain native and joined the Marines at age 17 in 1945. Having entered the service only weeks before Japan’s surrender, Polaske was among thousands of Marines who prepared in the South Pacific for an invasion of Japan, which was avoided following the bombing of Hiroshima. He completed active duty in 1949 and served two more years in the Marine Reserves. Polaske had a long career in manufacturing and tool design, working for companies including New Britain Machine and North & Judd. Like his friend Willie, Polaske stays young playing golf regularly at Timberlin.

Founded in 2009, the Golden Kielbasa Veterans Open has supported a wide variety of veterans causes over the years. The 2021 event will support DAV Hardware City Chapter 8 and House of Heroes Connecticut, which provides one-day, no-cost home improvements for Connecticut military and public safety veterans and their surviving spouses.

For further information about the Golden Kielbasa Veterans Open, to reserve your foursome in advance, to sponsor the event or for general questions, please contact Tournament Director Dennis Buden at dennis.buden@davchapter8.org or 860-558-0514.