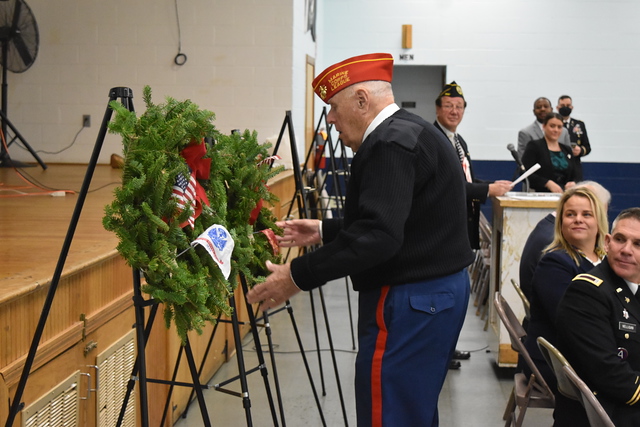 NEW BRITAIN – New Britain veterans, dignitaries and residents laid wreaths during rainy, cold weather in Fairview Cemetery Saturday morning to remember the costs of freedom and the sacrifices of local veterans as part of a national initiative called Wreaths Across America.

After placing those wreaths, supporters gathered at the VFW Post 511 to share words in honor of the fallen.

“Every year, this group brings our community together to raise money and plan the placement of 1,250 wreaths on veterans gravesites at Fairview Cemetery,” said Stewart after thanking DAV Hardware City Chapter Eight’s Wreaths Across America Executive Committee for its organization of the event. “The support from our business community and community at large has been overwhelming and inspiring too.”

The mayor said she felt fundraising events for the wreath laying had been impactful on area residents. She received many calls from members of the public asking why the wreaths had not gone up in a previous year. She jokingly said that more money needed to be donated to the cause.

“It really shows that we’re a community that genuinely cares about our veterans, cares about our service members and we want to make sure we honor that and do it properly,” said Stewart. “When we think about the purpose of today and the slogan: Remember, honor and teach, I like to take every opportunity that I can to teach everybody in our community about the so many different ways that we pay honor to our service men and women…”

Stewart referenced New Britain monuments and the numbers of names written on them to memorialize the names of New Britain’s deceased veterans.

Nelligan, originally from the neighboring community of Bristol, also knows about central Connecticut’s dedication to remembering veterans. The officer shared that his mother was born in New Britain as well.

Nelligan said he met the founder of Wreaths Across America years ago when he did his first Arlington National Cemetery wreath laying. The officer said the wreath’s circular shape represented eternity as it had no beginning and end and the evergreen it is made from represented growth and everlasting life.

“I don’t know about you but that pretty much talks about everything when we say we honor our veterans and our deceased veterans that we keep alive by doing things like this because if we don’t remember them, eventually no one will remember us and then we have a problem,” said Nelligan.

He continued by saying he had recently been in Washington D.C. having conversations that concerned him and noted it was a troubling time for the world.

“We need our military now as much as we ever have,” said Nelligan, “But more importantly, we need the patriotism of this country to be rock solid. I’m not allowed to make any political commentary, nor would I, but I can tell you this. The only true core group that always comes together, regardless of our personal opinions, are veterans.”

“Just like you did today in inclement weather to honor those at the cemetery,” he continued. “This needs to be the foundation of our country moving forward.”

As part of a national effort to pay tribute to America’s veterans during the holiday season, Wreaths Across America was started by Morrill Worcester and his wife Karen Worcester of Harrington, Maine. Now owning the Worcester Wreath Company, Morrill remembered a time as a child when he visited Arlington National Cemetery and the impression it made on him. In 1992, the family wreath company realized it had extra wreaths and made arrangements to have them placed on graves at Arlington. For years, wreaths were brought to the graves, but they didn’t spark a national trend until the 2000s when shared in a picture on the internet. Thus started a national tradition of placing wreaths on veteran graves shared by organizations and supporters throughout the country.

In 2012, Commander of the DAV Hardware City Chapter Eight Commander Dennis Taricani said he saw a picture of a wreath on an Arlington National Cemetery gravestone on the internet. He thought it was profound and wondered how the effort could be brought to New Britain before persuading the DAV Chapter Eight to become part of the initiative in 2014.

Co-chair of the local Wreaths Across America Executive Committee Al Parlow said it can cost as much as $18,000 a year to fund the event and that support from area businesses and residents was integral to its continued existence.

Maggie Wernicki, Miss Connecticut Young Teen of Service 2022 and assisting with some of the day’s activities, said, ”To me, (veterans) are really the providers of our freedom and paid more than enough to us and I feel there’s no good way to honestly repay them for what they’ve done. Wreaths Across America is one small thing that we can do to honor them around the holiday season.”