New Britain, Conn., December 8, 2022 – The New Britain community will once again commemorate Wreaths Across America Day on Saturday, December 17, at 11 a.m., with ceremonies and the placement of approximately 1,250 holiday wreaths on veteran gravesites at Fairview Cemetery. 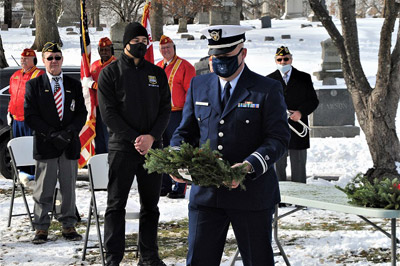 This year’s event comes four days after the national Wreaths Across America “Escort to Arlington” 50-plus vehicle convoy, transporting some 300,000 wreaths next week from Maine to Arlington National Cemetery, makes an official stop in the Hardware City. Ceremonies welcoming the convoy are taking place at New Britain High School on Tuesday, December 13, at 10 a.m.

Members of the public interested in assisting in the placement of wreaths on veteran gravesites are asked to report to the Veterans Section of Fairview Cemetery, 120 Smalley Street, New Britain, at 7 a.m. on Saturday, December 17. For complete information on the Wreaths Across America of New Britain initiative, please visit www.davchapter8.org/wreaths-across-america-new-britain. For information about the national Wreaths Across America movement, visit www.wreathsacrossamerica.org.