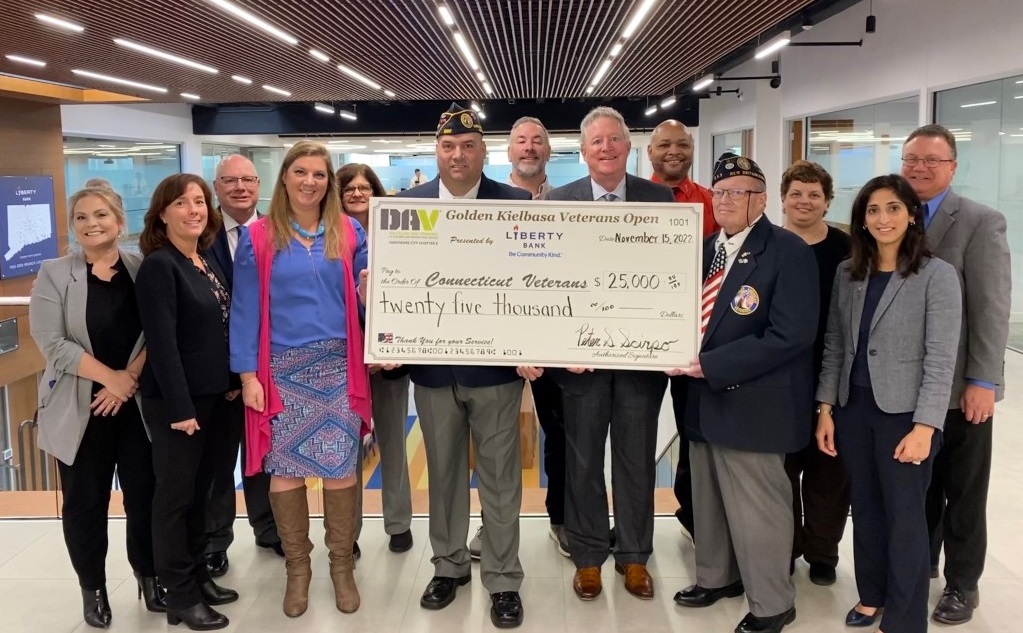 The state’s premier veterans charity golf event, founded in 2009 and since 2011 a full-fledged charity event focused on supporting state veterans, has now raised more than $180,000 in its history. Primary beneficiaries of the event are its host, the Disabled America Veterans, Hardware City Chapter 8, and House of Heroes Connecticut.

“It was truly gratifying to see this special event’s level of support return to pre-pandemic levels,” said Tournament Founder and Director Dennis Buden. “Connecticut veterans depend on the dollars raised by this event. On behalf of DAV Chapter, House of Heroes Connecticut and the veterans we serve, we thank Liberty Bank and our all of our golfers, sponsors and supporters.”

“We are dedicated to supporting veterans and military families in many ways as we live out our mission to improve the lives of all of our customers, teammates and communities for generations to come,” said David W. Glidden, Liberty Bank President and CEO. “This rewarding partnership allows us to give back locally to help our veterans succeed as we work together to make an even greater impact. We are proud to be the Presenting Sponsor of this event and to continue our investment year after year.”

Liberty Bank has committed to returning as lead sponsor for the 2023 Golden Kielbasa, which will take place once again at Tunxis Plantation on Friday, September 29, 2023. With Liberty’s commitment and a date already set for next year, Buden anticipates even greater success next year and beyond.

“I have every confidence that with Liberty Bank’s leadership in place, along with a 2023 date already set, our 2023 event will be the biggest we’ve ever had,” said Buden.

Making the “GK” – as the event is fondly called by its fans – unique is its focus on honoring veterans and their service. This year’s post-golf dinner was highlighted by ceremonies honoring the late Angelo Tomasso, Sr. and Angelo Tomasso, Jr., veterans of World War I and II, respectively, and iconic New Britain business and community leaders; and 95-year-old Al Nelson, a lifelong New Britain resident who served four years in the Navy during World War II and another 30 with the New Britain Fire Department.

For more information about DAV Hardware City Chapter 8 and the Golden Kielbasa Veterans Open, visit www.davchapter8.org. Inquiries regarding sponsorships for the 2023 event may be directed to Dennis Buden at dennis.buden@davchapter8.org.

About the Disabled American Veterans

The Disabled American Veterans (DAV) is a non-profit 501(c)(4) charity dedicated to building better lives for America’s disabled veterans and their families. Last year, the organization provided more than 163,000 rides to veterans attending medical appointments and assisted in filing over 151,000 claims for benefits. With more than 1,200 chapters, including DAV Hardware City Chapter 8, and more than one million members across the country, DAV empowers our nation’s heroes and their families by helping to provide the resources they need and ensuring our nation keeps the promises made to them.

About House of Heroes Connecticut

House of Heroes Connecticut is a 501(c)(3) non-profit organization that recognizes, honors and serves military and public safety veterans in need and/or their surviving spouses for their sacrificial service to America. The organization provides one-day, no-cost home improvements with a priority placed on safety and accessibility. Part of a national organization founded in Columbus, Georgia, in 2000, House of Heroes Connecticut has served more than 180 veterans in 59 Connecticut communities and seven additional states since the chapter’s founding in 2012.

Established in 1825, Liberty Bank is one of the oldest and largest mutual banks in the country. With more than $7.4 billion in assets, Liberty has 56 banking offices across Connecticut and one in Massachusetts. As a full-service financial institution, Liberty offers consumer and commercial banking, cash management, home mortgages, business loans, insurance and investment services. Named ‘Top Workplace’ by the Hartford Courant every year since 2012 and designated a 2021 and 2022 Best-In-State Bank in Connecticut by Forbes Magazine, Liberty maintains a longstanding commitment to superior personal service and unparalleled community involvement.